The ER Visit that Wasn't.

This situation isn't the "spending multiple hours in the ER waiting room" kind of traumatic; it's more the "maybe my child is having a weird allergic reaction to vaccines** and his eye is going to melt out of his skull" kind of traumatic. There's a fair bit of (hopefully funny) background to this story, so hold on.

This happened the day of the boy's 4 month (!!) appointment. Shockingly enough, the husband was able to take an hour and a half off from work to attend this appointment. He never tells me in advance that he'll be able to make it, mostly because that always ends with a "Sorry - things came up and I can't be there. Oh, and it will probably be a late night" phone call. I'm not exactly bitter about this, as he's had this job for about a year and I've mostly gotten used to the insane hours, but I am sad that he can't be as involved as he wants to be.

Here's something that could probably take up an entire blog of its own: the husband and I are both pretty "assertive," opinionated, and like to be in charge. For the husband, this makes him really good at things that are important in his job, like delegating and yelling at people. For me, I think that just makes me overbearing and kind of annoying. But, let's pretend that it's endearing. So, as much as I appreciate when he's around for stuff and as happy as I am for him that he gets to be involved, sometimes it's kind of annoying. (Ugh. I sound so petty and ridiculous.) For instance, the husband has a tendency to take over and answer all the questions about the boy's development and current abilities. The problem with this is 1) as I've mentioned, I like to be in control; but mainly 2) that the husband doesn't spend as much time with the boy and - let's face it - isn't always aware that what he thinks are new skills are actually things he's been doing for 2 weeks. (Okay. This is the part where I'm a little bitter.) So then the appointment takes twice as long because the husband is providing inaccurate answers, which I have to correct clarify. To his credit, this has happened several times in the past year or so, but now I can squeeze his hand or glare at him, depending on the level of inaccuracy, and he smiles sheepishly and from then on defers to me.

So, this particular doctor appointment went the same way - he took over, I glared, he pretended to let me take charge. Don't worry - I'm not planning on bragging about how great the boy is doing, but here: 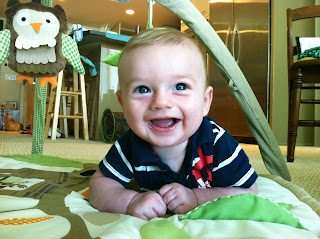 (Please ignore the spit-up and the messiness)

Then, the doctor talked to us all about starting him on "solids" (i.e. - icky pureed mess that will probably permanently damage the light-beige carpet in our, um, rented apartment) and prescribed the boy some children's tylenol because it was (dramatic pause) vaccine day.

The following is a description of the horror that is infant vaccination. First, after the 2nd month appointment and its correlating vaccines, the parent knows exactly how horrible this is going to be. The wait is agonizing: hearing other small children scream as they receive their shots, knowing that your child is going to be the one enduring pain-of-death (heh.), and trying to bestow the last bit of comfort you can while you await your child's gruesome fate. Then, they call the child's name. It's like some macabre version of "Come on down! You're the next contestant on The Price is Right!" except instead of winning a car or thousands of dollars, you're winning pain for your child. Congrats!! Finally, you're in the room. It's freezing cold, and you have to take the babe's pants off, which starts the discomfort and all you can think of is how this is nothing compared to what suffering he'll endure in just a couple of minutes.

The husband had never seen the boy very upset until this point. He had seen the "Seriously, guys - I'm getting pretty hungry over here," but not the "Holy S***, woman!! You just dropped an entire soda on me while I was just innocently sitting in my stroller! You are a horrible person!" (True story.)

Parenthetically, the husband still gets a little nervous from the hunger cry, and says things like "uh, baby-momma? The boy is starting to freak out." And then I say things like, "eh - He's fine. Just bounce him for a minute; I need to go to the bathroom/finish unloading the dishwasher/pour myself a glass of wine."

Since the husband knew that the 2 month vaccinations were so traumatic for me, he said that he would hold the boy when he got the shots. So, I stood myself in a corner like a 3rd grader who had just pulled a classmate's pigtail braids and tried to suppress the dread.

Parenthetically (again), I try really hard not to "rescue" the boy from his dad when he's crying (the boy, not the dad - heh). Sometimes this takes all of the restraint I can muster (which, let's face it, isn't much), but I think it's really important that the boy turns to the husband for comfort and the husband develops his own skills to comfort the boy.

However, the second the nurse/tech/corp(wo)man indicated that she was done, I swooped in and confiscated the boy. I didn't even ask the husband if I could have him - I probably would have fought him to the death if he had resisted. Thankfully, he did not resist and the only one who suffered physical pain was the small, helpless infant that had been entrusted to me by God him/herself.

Next came the pharmacy and associated administering-of-the-tylenol. I will not go into the hot mess that was me trying to shove the massive syringe filled with viscous grape-flavored nastiness down my uncooperative child's throat. (To totally geek out, I felt like I was Harry Potter, forcing Dumbledore to drink all the potion in the stone basin, saying, "Just this last bit - this will help, Professor!") All I will say is that I had to wash both of our outfits more than once before the syrupy grape smell was completely removed and I kept finding spots of gooeyness on the boy for a couple of days - even though I bathe him every night before bed. Gross.

All afternoon, he was a puddle of grape-scented mess. About 3 hours of fussiness later, I noticed that he had this spot on his eye that looked like someone had recently punched him. It was red and a little puffy. He hadn't been hurt by anything (on his face, at least), and it didn't really seem like an allergic reaction because it wasn't located in a "classic" reaction place and wasn't irritating him.

It was 6 pm. I talked to my mom/family nurse, and drew a circle around the affected area with eyeliner (yes, eyeliner) to make sure it wasn't spreading. Then, I remembered the agony of the last two ER visits and the overreaction that led to the ER visit before those, and decided to maybe go through some other channels before I committed myself to an evening of tediousness.

Here are some thoughts on the eyeliner situation. I thought that it would stay for the evening/night (which it did), but I absolutely forgot that it's waterproof. This unfortunately meant that in order to remove it, I had to scrub at it a little with some soap. Surprisingly enough, the boy was not a fan of the scrubbing, so he spent more than one day looking like Petey from Little Rascals: 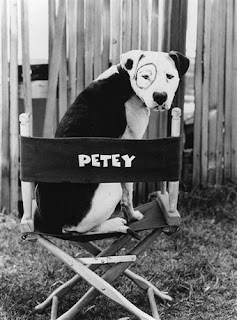 Moving on. Here's a tip for anyone associated with the Navy who lives in the area, there are after-hours provider hotlines. I called the hotline, explained the entire situation to the gal that answered, and after 3 minutes of explanation she said, "Okay - I'll contact the doctor and tell him that your son is having some concerning symptoms." You know, because that totally summed all of that up. But, almost immediately, I got a call back from a doctor. I cautiously explained the situation in short 10-second bursts, hoping that he would stop me sooner rather than later if he wasn't the person I needed. (Why is it that I always do this backwards? Oh, right - my motto is "when in doubt, be verbose.")

Thankfully, though, he was the right person. He was great: informative without being condescending, assumed that I might just be a responsible parent who is proactive in the health of my child (shocking!), and basically just chatted it over with me. We decided (seriously, though - it was mutual) that it was probably that the boy came in contact with something that would not normally have irritated him, except his immune system was on high-alert from the vaccines. (My bet is his play "gym" that I washed in delicate soap, which - sin of all sins - isn't fragrance-free. There goes Mom-of-the-Year.)

In retrospect, the background was much more interesting than the non-ER portion. But, isn't having an uninteresting night the point of not going to the ER?

**Also, I know that vaccinations and the parenting choices around scheduling them and/or giving them at all is kind of a hot-button topic right now. I respect parents who are proactive and involved in their child's health, and understand that the choices the husband and I make for our family aren't always the same as others'. All that said - if you have a staunch opinion regarding this personal choice that we have made, please find a place to judge us that does not include the comment section of this blog. Gossiping behind our backs is completely encouraged.
Posted by Jessica at 10:36 AM No comments: